All posts in Celebrity

There isn’t much info on Anne Hathaway’s wedding (let alone images of her pro wedding photography) unfortunately but that wedding dress just has to be blogged about. Anne married her beau in a secret sunset ceremony in September of last year and while most photos I have managed to track down are obvious paparazzi shots (i.e. very grainy!) you can tell that the couple were clearly having the day of their lives.

Married at scenic Big Sur on the Californian coast it was a low key affair with a modest guest list of about 150 people (well, modest for a celebrity) who were serenaded to Jazz trio Americano Social Club. They married surrounded by pine trees in specially erected marquee bathed in sunset light (sunsets are a longer affair in the northern hemisphere, try that in Perth and there will be no light by the time you say ‘i do’!.. grumble, grumble). An Autumnal theme featured throughout the reception with branches and 60,00 dollars worth (gasp and faint!) of flowers.

Now to that dress! Designed by Valentino the dress is dreamily romantic. Layers of chiffon and tulle with the double whammy of long train and cathedral length veil. Covered in intricate lace work and featuring a hand painted train with embroidered satin flowers it features an off-the-shoulder style with a natural waist bodice. It has a slight pink tinge at the bottom but is so subtle you could almost believe its a trick of the light. While Anne kept her accessories to a minimum she did adorn her really short hair (thanks to her role in Les Mis) with a 1920’s style headband. Anne didn’t want to have short hair for her wedding day but I think she found a perfect way to look classically romantic even with pixie lengths. She finished it all off with a simple ivory rose bouquet and the best accessory of all, a huge radiant smile.

Enjoy the pics and hope it give you some inspiration in any wedding planning your doing!

(Pics from Vogue and OK! Magazine) 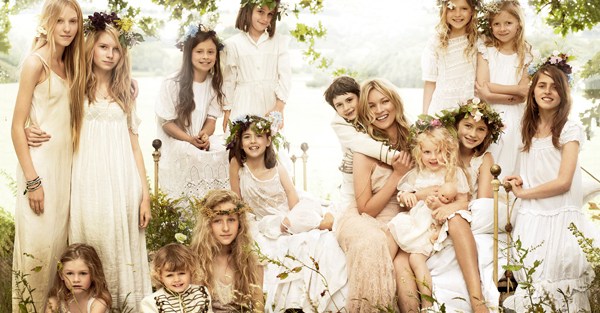 While I love a celebrity wedding as much as the next person I have to admit that many of them are pretty ho hum affairs. They follow a pretty set formula, for example:

Celebrity A and B got married in stunningly expensive location C surrounded by x hundreds of their closest friends and family, the dress was by designer D and the lovely couple honeymooned at E. They are beautiful affairs with big dresses, smart tuxes, expensive cakes and huge venues but their rarely anything unique. Basically they are exactly what we would expect the sickeningly wealthy to do. But every so often a wedding comes along that bucks the trend, and one reasonably recent wedding that did this was that of Kate Moss and  Jamie Hince. Kate Moss may well be fashion royalty but her wedding was refreshingly free of fashion pretence and felt like it would have been a genuinely fun event to be a part of.

Kate’s gown was what every bride who ever wanted a vintage gown could dream of; ethereal and ornate but still edgy enough for the modern day (it was sheer after all), designed by none other than John Galliano. Her veil looked like it had been stolen from the 1920’s without looking dated or old. The bridal party were not forgotten with lovely children’s outfits in cream and white (military page boy coats!). Married in  a beautiful stone church and a reception in a country field setting (but with marques) the word ‘perfect’ comes to mind with this wedding more than once.

While unconventional the use of white and cream for all the outfits for the girls with floral crowns to top them off,  really amplified the summery vibe for this July 1st 2011 wedding. But there were other surprises as well, from Teepee’s for the kids to Kate’s stunning glitzy red coat/cape which just dripped glamour and rockstar sex appeal (note: the couple had a pre wedding shoot in which they wore different clothes but it still counts as far as I am concerned, if i could afford more than one set of wedding clothes I would have been up for it as well!).

Their wedding photos were also unique which is to be expected from Mario Testino, fashion photog extraordinary. Whoever came up with bringing in red into the pre wedding shoot pics was a genius, it really brought out the green of the scenery and is something more brides should be open to – white is beautiful but adding some bright spots of colour can only serve to enhance its brilliance.

I also adored the group photos of the bridal party (which do look like a Vogue setup when I think about it)  and have been guilty of trying similar setups when time, location and props allowed. Their casual and fun and its clear that no one was too obsessed with making all the kids look 100% perfect (although they do come close!). I loved the mostly natural processing that also allowed for rich dramatic colours which again suits Kate fashion background. Truly an inspiration for our profession.

I am sure many brides have taken inspiration from this wedding!

All images by Mario Testino for Vogue 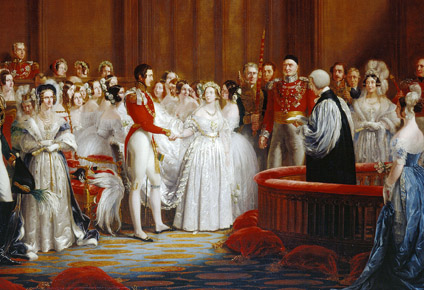 Most Fridays I will be covering a celebrity wedding. As you can see from this post I am quite loose in my use of the term of “celebrity” to cover historic personalities as well.

I thought Queen Vic’s wedding was an appropriate beginning because, well, she started the trend that nearly all brides follow to this day: The white dress. Before Queen Victoria married Prince Albert (a match based on Love more than anything else *) women generally wore their best gown to be married in. Of course, for those who came from noble and aristocratic backgrounds this gown would be especially made for the occasion but it was almost never white. The gown would often be made of gold, silver, silk, brocade; heavy and rich and denoting the status of the wearer and what bounty she brought to the marriage. Poorer women could never dream of such riches but they would wear their best gown. 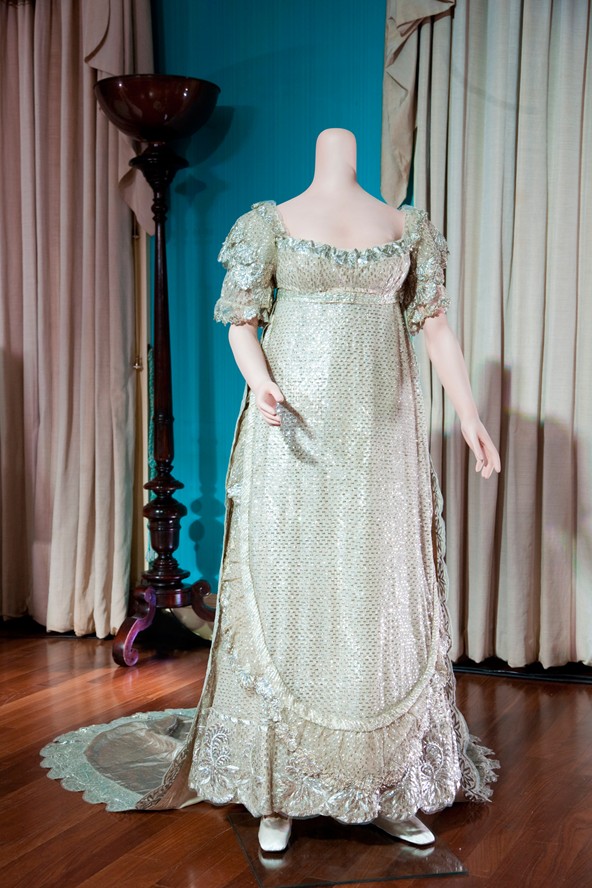 Queen Victoria, the first ruling queen England had had since Queen Elizabeth, sought to break this trend. She wanted a dress that would suit her romantic imagination and hence a dress was made of white satin and silk with lace and orange blossoms. Queen Victoria was not the first to wear a white wedding dress but her example inspired a nation and beyond. Funnily enough she was criticised by here choice, as “At the time, Victoria’s choice was criticized for being too conservative, since she did not wear jewels, velvet, ermine furs, or a crown, and the color was unusual”(Wikipaedia). Clearly she was a woman ahead of her time.

Within a decade wearing white at the wedding was so common that “The Godey’s Lady’s Book, wrote: “Custom has decided, from the earliest ages, that white is the most fitting hue, whatever may be the material. It is an emblem of the purity and innocence of girlhood, and the unsullied heart she now yields to the chosen one””(Wikipaedia), even though it was a really recent innovation!

Times may have changed since then but brides still wear white on their wedding day and most love a puffy princess dress, although we are less into puffy sleeves than Queen Vic’s version!

I love the shoes she wore, you can still imagine a bride today choosing those sweet ballet flats with ballet like lacing.

Enjoy the pics below from her wedding! I love how the artists “airbrushed” her in their illustrations – somethings never change! 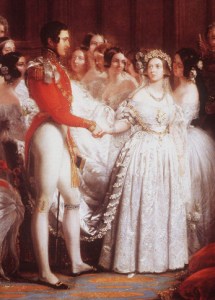 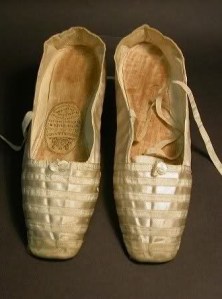 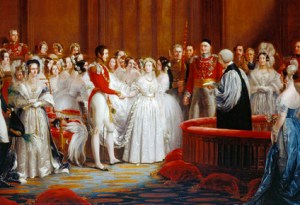 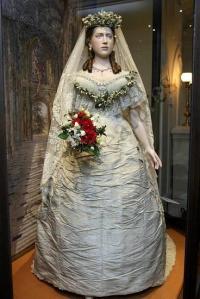 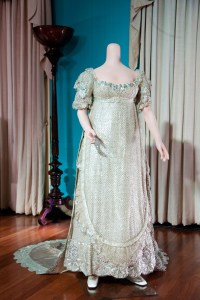 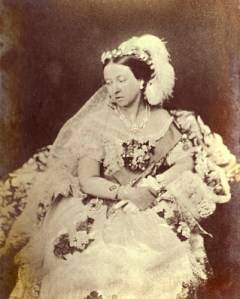 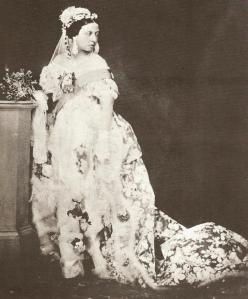 * After his untimely death Queen Victoria went into permanent mourning for her beau. If you visit Osborne House in the Isle of Wight and go to her bed she actually  had “on the headboard of the bed …Prince Albert’s pocket watch and alongside it … a tinted photograph of the Prince after his death. Queen Victoria always had these two objects hanging on the headboard in each of her royal residences…Beside the bed is the Queen’s favourite painting of her husband as a young medieval knight.” (Open Learning)